From bones, bronzes and sites to society – The European Archaeologist 2016

From bones, bronzes and sites to society: Multidisciplinary analysis of human mobility and social changes in Bronze Age Hungary (2500–1500 BC)

Due to its geographical location and to climatic factors, the Carpathian Basin played a central role in prehistoric Europe for millennia. It was a borderland between important regions, and connected other areas of the continent via important geographic information corridors like the Danube. The Bronze Age – following the initial spread of farming in the Neolithic and the great innovations of the Copper Age – was of crucial significance in the shaping of the current cultural make-up of the region. Due to the exchange of the eponymous material, bronze, distant regions linked up with each other.

In a five-year-long (2015–2020) multidisciplinary research project, launched this year in the Institute of Archaeology, Research Centre for the Humanities of the Hungarian Academy of Sciences, and supported by the Hungarian Academy of Sciences Momentum research programme, “From bones, bronzes and sites to society” will study the first thousand years of the Bronze Age (2500–1500 BC). Previously, changes during this period, like the spread of knowledge about bronze metallurgy or the large-scale appearance of ceramic styles, vessel forms or burial types throughout Europe, were usually explained by the arrival of a new population, that is by smaller or greater migrations. This approach has changed recently: new social theories in international research have demonstrated the error of making a simple equation between finds and ethnic groups, or between archaeology and history of events. Due to the archaeological application of increasingly refined scientific methods – scientific dating, palaeopathology, genetics, isotope chemistry and geophysics – we have witnessed a fundamental paradigm change in prehistoric research (Kristiansen 2014; Fischl et al. 2015). However, migration is indeed an important social strategy, often used both individually and by communities to resolve internal conflict and better their situation. A basic question in archaeology is: “who (or what) moved: people, objects or ideas?” Our project sets out to leverage the increasing record of success in archaeogenetics and recent developments in archaeometallurgy to address these questions.

Cooperation of the institutes of the Hungarian Academy of Sciences (Research Centre for the Humanities, Centre for Energy Research, Wigner Research Centre for Physics, and Institute forn nuclear Research), complemented by wide-ranging collaboration of other institutions, enable the joint work of generations of archaeologists, physical anthropologists, and specialists of natural and life sciences. In the first year of the project we have begun the non-destructive analysis of Bell Beaker (2500–2200 BC) tanged daggers and a halberd using neutron-based methods (promt-gamma activation analysis and time-of-flight neutron diffraction; for an earlier study with the same methods see Kiss et al. 2015), and a pilot study of Middle Bronze Age (2000–1500 BC) gold finds. We are also conducting a complex re-analysis of a Bronze Age burial assemblage from Balatonakali, near Lake Balaton in western Hungary, with radiocarbon dating and bioarchaeological study of the human remains, completed by the analysis of the metal finds (Fig. 1). 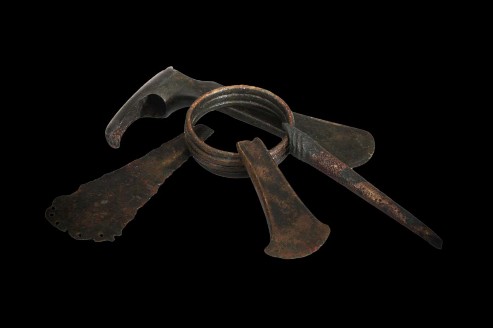 As part of the comparative settlement research, we will analyze the regional characteristics of settlement networks and their changes through time in four micro-regions, in the first year with field surveys in the Benta Valley and in the Kakucs region (see Earle et al. 2013-2014; Kulcsár et al. 2014).

The palaeopathological examination of the general health status and lifestyle of the period’s population, including the traces of Bronze Age warfare and violence, as well as diseases, is also an important element of the project. Our aim is to compare the genetic profile of skeletons found in special pits (“mass graves”, e.g. from Érd: Fig. 2) in settlements and in “traditional” burials within cemeteries in order to establish possible kinship ties and reconstruct their unique histories.

Our expected results will complement the results of similar studies in Europe that target other geographic areas (e.g., Allentoft et al. 2015; Stockhammer et at. 2015), and will contribute significantly to a better understanding of the development of the Bronze Age in Central Europe. Other regional projects are likewise complementary, for example, BAKOTA, BORBAS, and the Social Status of Motherhood in Bronze Age Europe. Ultimately, we envision contributing to broader understandings of human mobility and cross-cultural interactions. 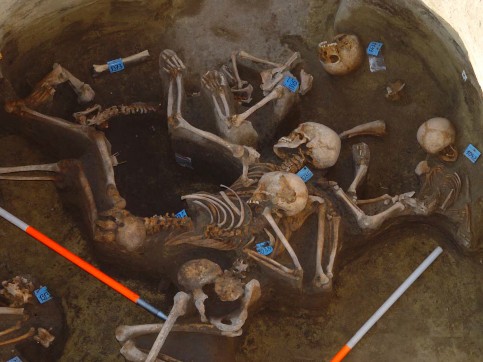 Kristiansen, K. 2014. Towards a New Paradigm: The Third Science Revolution and its Possible Consequences in Archaeology (including comments). Current Swedish Archaeology, 22: 11-71.