Archaeological excursions along the Arany Stream – Treasures of the Bronze Age cemetery of Nagycenk 5.

Cemeteries similar to the one at Nagycenk (described in our previous posts), are known in relatively large numbers from Austria, Western Hungary and Slovakia. Together, more than 1500 graves of the Gáta–Wieselburg culture were excavated here.

Where did the people buried in the Nagycenk cemetery live?

But to find out where these people lived, the available archaeological sources are less than sufficient. A couple of settlement traces of the Gáta–Wieselburg culture are known from Austria, including a house with a construction trench (Krenn-Leeb 2011). Within the administrative border of present-day Bratislava, the find material of some storage and waste pits of the culture was published (Bartík et al. 2016).

It is significant, therefore, that during the excavations led by János Gömöri, a part of a Bronze Age village (seeming poor compared to the richness of the graves) was found 200 metres northwest of the Nagycenk-Lapos-rét cemetery. The shape and production technique of the ceramic pots found in the scattered garbage pits of the settlement have many similarities with the vessels from the burials. Recently, their supposed coevalness has been confirmed by radiocarbon data from the site (1900-1750 BC). A larger number of coarse cooking or storage pots and amphorae, as well as traces of stone tool making were found at the settlement. 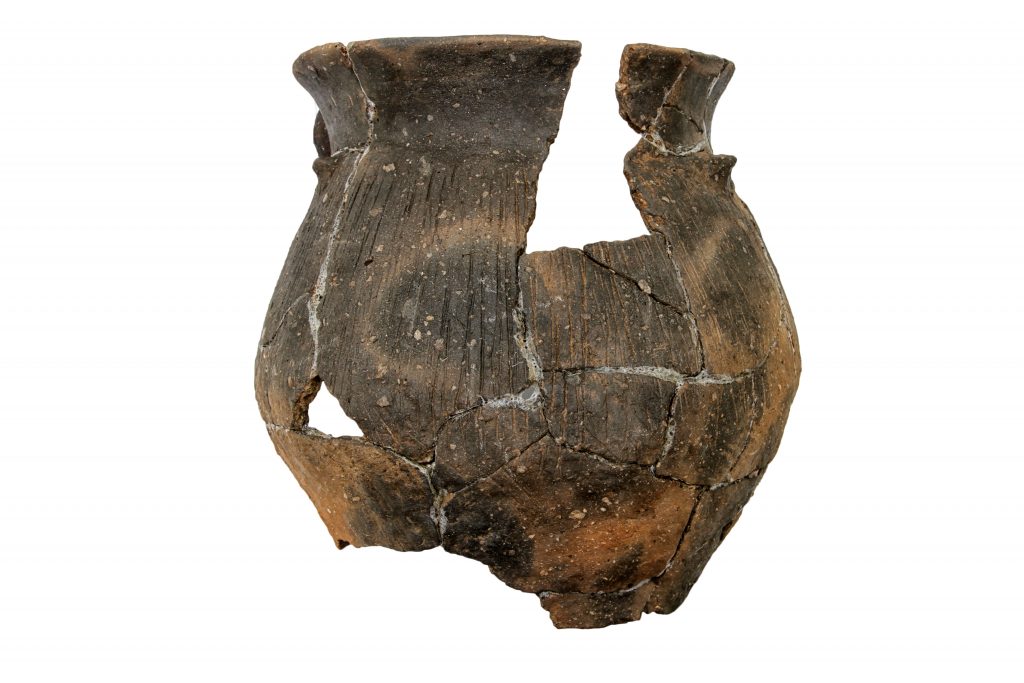 The excavated postholes refer to wattle-and-daub buildings, but their shape and size are difficult to reconstruct due to the narrow excavation trenches. Additional non-destructive archaeological techniques were called to assess the extent of the site.

Our research group has already started and intensified topographic research in the Kakucs Region, Central Hungary (Kulcsár et al. 2014). In the Nagycenk micro-region, our first step was to delineate different sites of various ages by extensive field surveys. To do this, we used the recently developed systematic field walking method for regional research (Mesterházy 2013). Aligned to the EOV (Unified National Projection) coordinates, we have collected archaeological finds, mainly ceramic fragments, on the surface of the cultivated areas at 25 m intervals, in north-south bands. The location of the finds was recorded by handheld GPS and packed every 50 meters, so 50×50 m squares aligned with EOV coordinates are the basis of our surface collection (Füzesi et al. 2015). 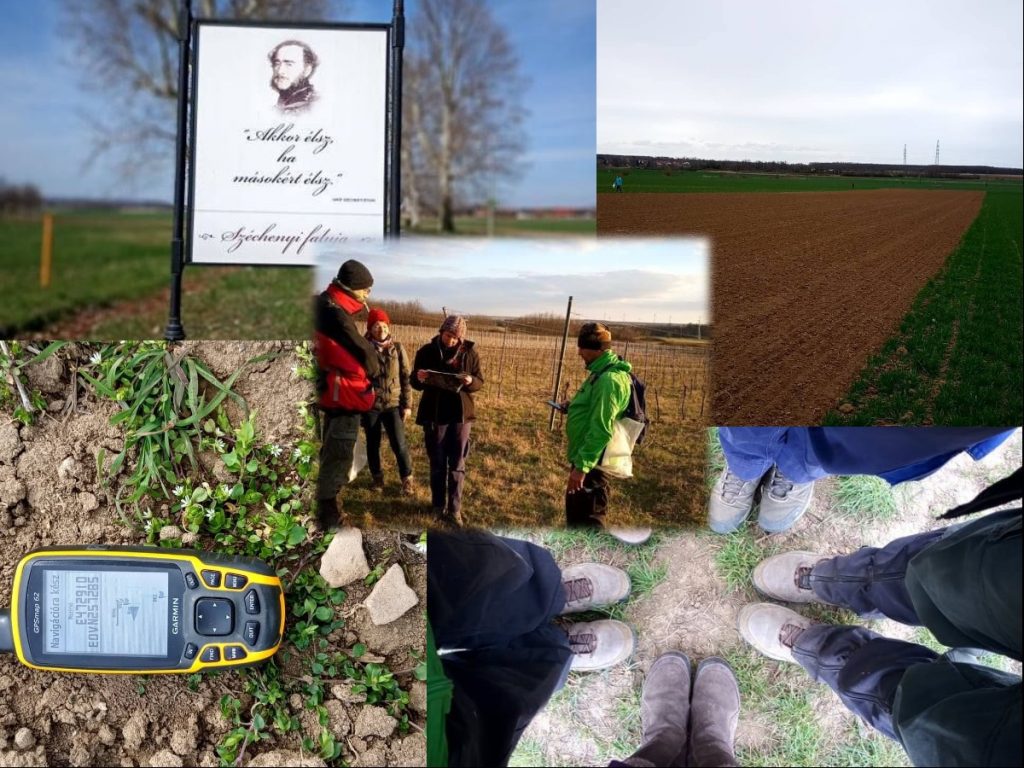 It was clear from the 2004-2005 excavations that the area of the Bronze Age cemetery extends to the east of the excavated surface. Besides the field walking, this area was investigated by geophysical methods. Gábor Serlegi and Bence Vágvölgyi conducted a survey by a SENSYS MXPDA magnetometer at almost 6000 m². The scientific basis of the method is the observation that the archaeological phenomena in the soil have their own magnetic field due to the presence of materials in their infill, mainly showing remanent magnetization. This magnetic value can be measured and separated from the magnetic value of the environment by the magnetometer. Although the method is well suited for recording archaeological anomalies, it is not suitable in itself to determine the age of the identified site (Serlegi et al. 2013).

A geomagnetic survey covering the vicinity of the Bronze Age cemetery identified a greater number of archaeological anomalies. The question is whether these are referring to pits or graves, and whether burials can be distinguished at all (Duffy et al. 2014). Comparing with the excavation summary map of 2004-2005, the southwest-northeast line of the Árpádian ditch could be observed on the survey map as well. The greater number of anomalies identified around the ditch are most likely to fit into the cemetery structure, thus we can assume that the cemetery covers this area of 1600 m² as well. However, the nature and age of the anomalies can only be determined by excavation. 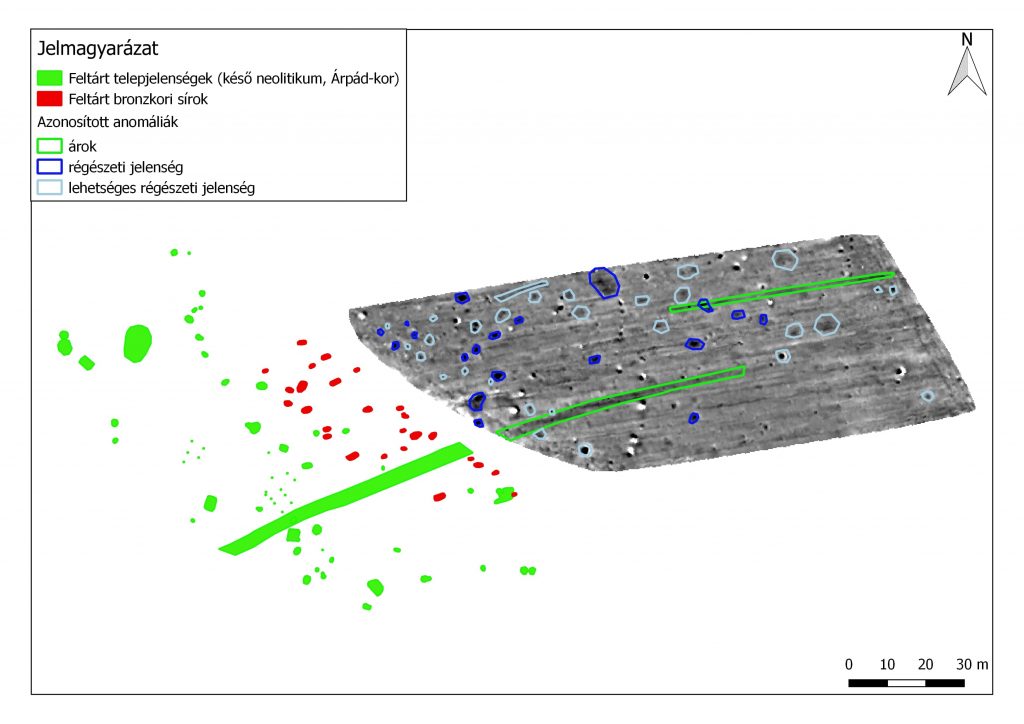 In the closer surroundings of the Bronze Age cemetery and settlement situated at the northern bank of the Arany Stream, the above-mentioned field-walking method was used to collect surface finds of the Gáta-Wieselburg culture from 35 hectares. This suggests a not very intense, but a large-scale settlement activity during the use of the cemetery.

In addition, during our field trips we were able to outline the extent of a partly excavated settlement dating to the end of the Middle Bronze Age, situated on the southern side of the Arany Stream. The Arany Stream flows between Nagycenk and Kiscenk into the Ikva River. Since this section was already regulated in the first half of the 19th century, the map of the 1st Military Survey (1782-1785) still shows the meeting of the Arany Stream and the Ikva in its pre-regulation state. 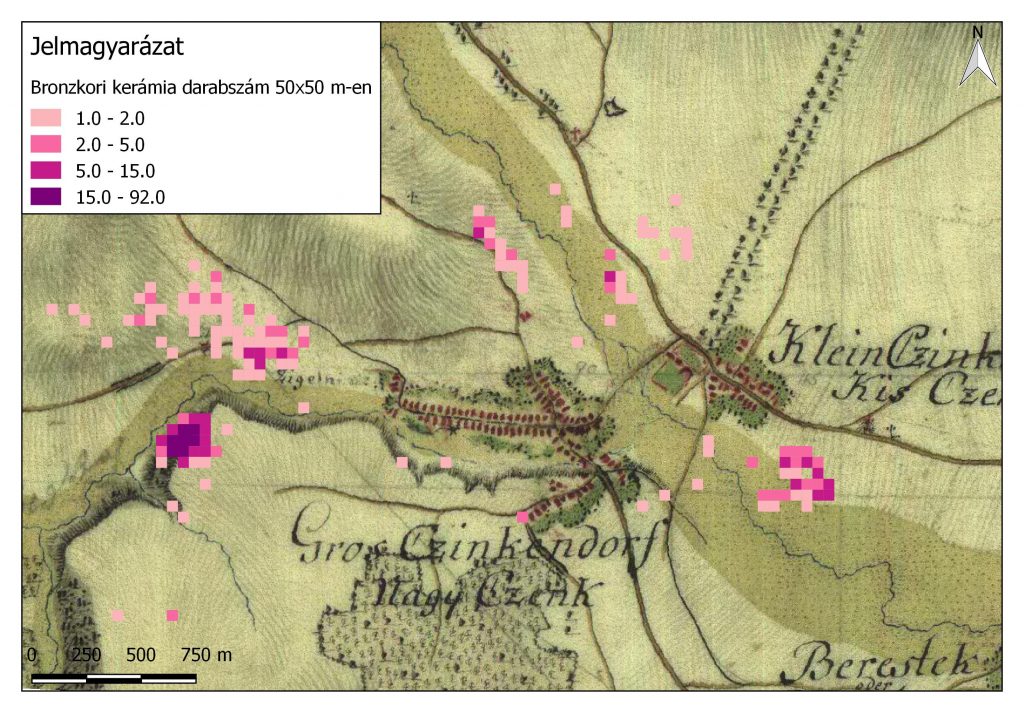 Distribution of Bronze Age field survey findings in the vicinity of the estuary of the Arany Stream, on the First Military Survey

To the north and south of the estuary, traces of previously unknown Bronze Age sites were identified on both sides of the Ikva. Our further goal is to obtain a kind of “cross-section” from the archeological topography of the region through the Ikva Valley to the edge of the Fertő Basin. On a protruding hill on the edge of the Fertő Basin, in the vicinity of Fertőboz, lies a Middle Bronze Age hilltop settlement. According to the excavation of Gyula Nováki, the southern part of the elevation was fortified in the use life of the Nagycenk settlement and cemetery, suggesting that this hillfort may have been the central settlement of the region. The fortified settlement of Fertőboz is the northern frontier of our research. Our future aim is to gain deeper insight into the Bronze Age settlement and social hierarchy of the region. 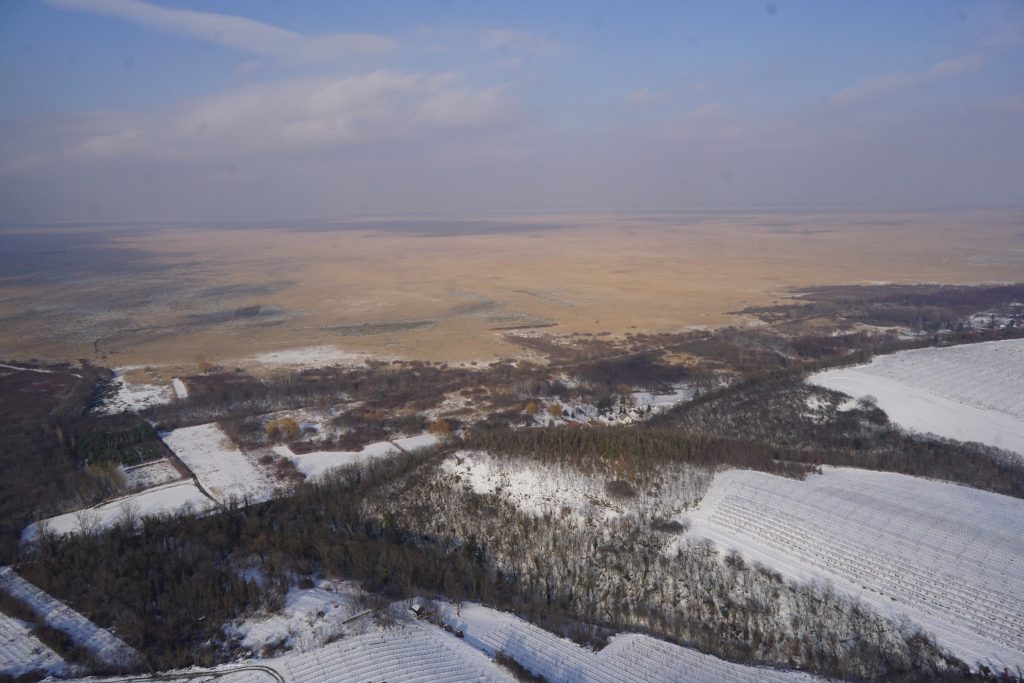 Drone photography of the fortified hilltop settlement of Fertőboz from the southwest (credit: Bence Vágvölgyi)